How to Select and Buy a Die Casting Machine 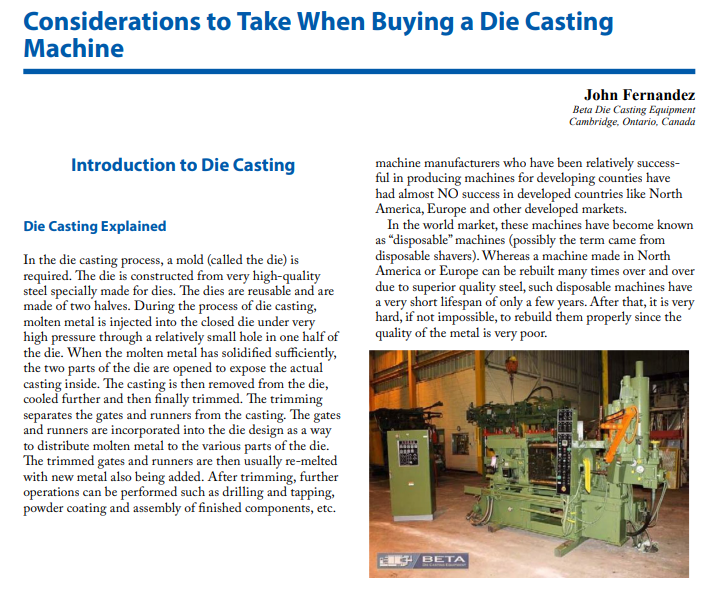 How to Select and Buy a Die Casting Machine

There are many things to take under consideration when buying a die casting machine. This section has been designed to simplify the process of sifting through all the options and selecting the right machine for your needs.

This is the age-old question that most people have. However, most people do not realize that when it comes to die casting machines (as with many other products), manufacturers of these machines produce several “export versions” depending on which “region” of the world they will be sold to. For example, die casting machines produced for the North American market will vary greatly in the quality of materials and technical capabilities when compared to machines produced for “developing” countries. The reality of the matter is that the North American market is much more “mature” and generally speaking has much greater requirements and expectations than other developing markets do. In addition, the level of sophistication, the product technology and budgets for equipment acquisition is greater as well. As such, many die casting machine manufacturers who have been relatively successful in producing machines for developing counties have had almost NO success in developed countries like North America, Europe and other developed markets. In the world market, these machines have become known as “disposable” machines (possibly the term came from disposable shavers). Whereas a machine made in North America or Europe can be rebuilt many times over and over due to superior quality steel, such disposable machines have a very short lifespan of only a few years. After that, it is very hard, if not impossible, to rebuild them properly since the quality of the metal is very poor.